He may have got his start making home videos with his sister for YouTube, but this month, Dylan O'Brien is ready for a slightly bigger screen with his debut role on MTV's Teen Wolf. In what may be the biggest week of his life to date, with the premiere of his new show, not to mention being a presenter at the 2011 MTV Movie Awards, Dylan found time to chat with Teen Vogue about his upcoming film The First Time co-starring Victoria Justice and Britt Robertson, his embarrassing high school "big-screen" debut, and the inside-scoop on this summer's most anticipated new series.

Teen Vogue: You've got a big week ahead with the 2011 MTV Movie Awards, the premiere of Teen Wolf . . .
Dylan O'Brien: Everyone is super excited about it and I'm just like, "Oh god!" My anxiety has taken over. MTV called and we are going to present, but I just can't get excited about it.

TV: It's the MTV Movie Awards!
DO: See that's the thing, I don't even know what I'm in for.

TV: What are you wearing?
DO: I got a few outfits yesterday. They're pretty sharp. I never have an opinion about clothes and know nothing about fashion.

TV: So how exactly did you get into acting?
DO: I moved to California when I was twelve and I got a video camera and made little movies because I didn't have any friends yet. I would force my sister to make these movies with me—which became my YouTube channel. A girl in my Spanish class found my YouTube videos and showed them to my teacher. At the end of class one day my teacher said, "pack up, movie time," and she dropped down this screen and put on my videos. I started freaking out. Everyone was laughing and I just ran out. The girl who had told my teacher didn't understand why I left, and she said, "You're really funny, you should be an actor." So that was one of the first times I thought about it.

TV: You should tell her to watch on Sunday.
DO: I'm actually still in touch with her!

TV: Give me the inside scoop on Teen Wolf. Why should people watch?
DO: Aside from the fact that I'm in it [he laughs], I think it's going to be really interesting because here we are taking on this genre that's been—well not beaten to death— but is everywhere and we're offering a refreshing show. I haven't seen Twilight or Vampire Diaries so it's hard for me for to say, but I know people will be surprised to see what it's really like, because it appears to be very Twilight-y, but people will see it's different—quirky and unique.

TV: I think people will really love your character.
DO: Hopefully people won't think I'm annoying. From day one, I knew my character [Stiles] would be the comedic relief, but also have these sincere, real moments of panic. When I auditioned, I read it how I saw it: A kid trying to convince his best friend that he is a werewolf. It could be a really silly topic, but I just tried to make it real—I guess it worked.

TV: I know you guys were a very tight-knit cast, what was your favorite memory filming in Atlanta?
DO: Tyler Posey—you know Tyler, he's going to be a wolf on this series [he laughs]—well me and the Tylers [Posey and Hoechlin] lived together. The entire first three months of shooting, we all started videotaping ourselves scaring each other. We figured we would have a whole compilation of us scaring each other—we haven't put it together yet— but we have so many videos!

TV: We're big Britt Robertson fans here at Teen Vogue, so I have to ask about your new film The First Time.
DO: What an experience! Britt and John [the director], the three of us, just became really close over the course of shooting. Britt is amazing, she is such a special person. The film is this really sincere, sweet story that totally came from the heart. I can't even describe it, I mean I don't even know how the movie will turn out [he laughs], but it's very Say Anything, which I feel hasn't been done for a while. I literally came from filming a wolf show for six months to this real, down-to-earth story that every kid experiences at some point—discovering what love is. Not in some cheesy film, but a real story. It was really nice to be able to tell that story and work with those people.

TV: You also have another film, High Road. . .
DO: Which is currently at festivals and is doing surprisingly well. I still haven't seen a wink of it, but my parents saw it. They're brutally honest people, but they said it's really fun.

TV: You really had no idea what you were entering into when filming it.
DO: For me, it was a really cool thing to be able to work with these amazing people and have a chance to learn improv from the best. I didn't have any expectations because we shot the whole thing in twelve days, with two cameras. I would get to base camp in the morning, get into wardrobe, get in a van to go to location and we would literally shoot a scene in the van on the way. It was so indie, I felt like I was making my YouTube videos again—kind of.

TV: Pop-culture guilty pleasure?
DO: I'm so boring, I check fantasy baseball and watch The Mets, but I don't feel guilty about that. I guess Selena Gomez, but it's wrong saying that cause she is dating Biebs.

TV: Most played song on your iPod?
DO: "Officer" by Slightly Stoopid.

TV: If you could have any superpower, what would it be?
DO: To be able to hit a 500-foot homerun—even though some dudes can just do that.

TV: What are you reading right now?
DO: The Girl with the Dragon Tattoo. Got to get it done before the movie comes out. 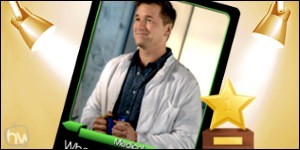